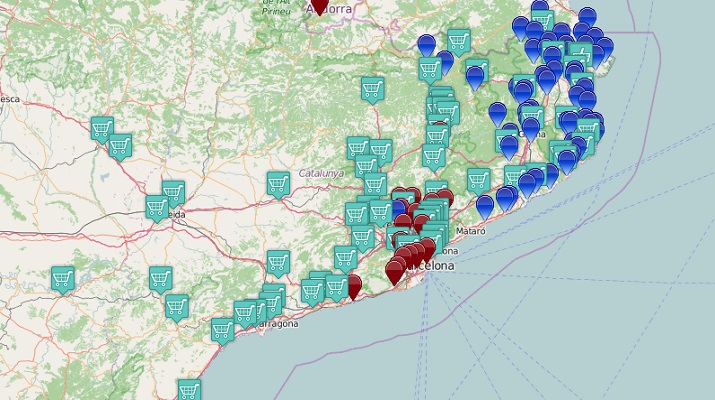 Only a few months have passed since the official presentation of La Brava in December 2015, but step-by-step the beer inspired by the Costa Brava continues to meet its strategic objectives of becoming the lager of choice in the province of Girona and one of the most popular in the Catalan territories.

As well as the bars, restaurants, nightclubs and small businesses (shops and bodegas) which have opted for La Brava since its inception, the company has now progressed with its expansion strategy. Just a few weeks after signing an agreement with the distributor Destil·leries del Maresme Brands (DMB), the deal opened the doors to almost fifty Vinalium establishments across Catalonia.

Thanks to this initial agreement—and having become a phenomenon throughout the province of Girona—La Brava reached the city of Barcelona, l’Hospitalet, Badalona, Sabadell, Terrassa, Andorra la Vella and 16 other towns and villages.

Now, when La Brava’s commitment to creating a quality product that is also accessible to all tastes has not even completed its first year, the beer inspired by the Costa Brava has taken the next step by reaching over one hundred Grup Bon Preu stores in 68 towns and cities. Specifically, La Brava is now available in 71 Bonpreu supermarkets (20 of which are in the city of Barcelona, with a further two in Girona and two more in Vic) and 31 Esclat hypermarkets.

As well as the distribution agreement providing for the initial points of sale in the provinces of Tarragona and Lleida, La Brava Beer is now spreading its wings beyond Catalonia for the first time to reach Aragon, with a presence in three establishments in the provinces of Huesca (Binéfar and Monzón) and Zaragoza (Caspe).

As Executive Director of La Brava Beer SL, Sergi Carmona, explains, “This agreement marks a before and after for us because it leads the company towards high consumption and therefore towards the consolidation of the brand and the product.”

“We still have a lot of work ahead of us and we want to continue along the same lines as we have so far: with humility and great effort. It’s gratifying when the market responds positively to our product and brand, despite the difficulties in the sector. We are keen to forge ahead with our business project and put two new styles of beer that we’ve been working on lately onto the market. In addition, we have several other strategic surprises we want to share with our clients and followers. Everyone will know about them very soon!” adds Carmona.

And in a matter of months the beer of the advert that went viral has gone from being a YouTube product to being a staple filling the shelves and fridges of fans of the best pilsner-style lager in Catalonia. Take a look at the map of La Brava Beer stockists on the website to see where you can find it. Will you be the next convert?